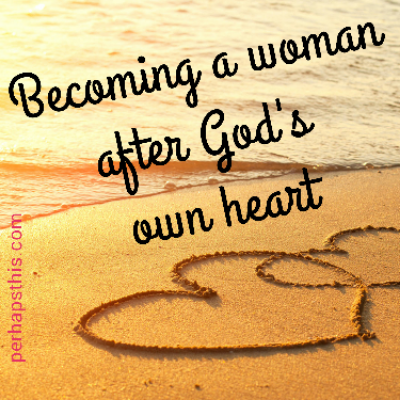 We hear all the time how David “was a man after God’s own heart” yet we don’t hear of anyone else in the Bible who was described in the same way.

What does that even mean? What made David so special? Does it mean David was perfect? That David had no problems? God loved David more than anyone else? And what does it mean to be a woman after God’s own heart today?

David sure wasn’t perfect. He screwed up a lot. Often. And Big. Where there was trouble, he seemed to be right in the middle of it. Let’s see, he challenged a giant when he was still young, one whom no one else could defeat, killing him with a single stone. Then there was the time he lusted after another man’s wife, but not just ANY man’s wife. A leader from his personal guard’s wife. He brought this woman to the castle, where they had relations and then when she became pregnant and it was obvious to the world that it couldn’t have happened with her husband who was off in combat, David had him killed.

David was an excellent parent. Nope, not that either. Fathering children from ten different wives, plus other unnamed wives and concubines, David had his hands full with them. Following in his father’s footsteps of lust and pride, Amnon summoned a woman (his sister) and raped her. When David did nothing in response to Tamar’s rape, their brother Absalom avenged her by killing Amnon.

David ran for his life, time and time again, exiled when King Saul tries to kill him, and again when Absalom tried (successfully) to take over the throne. Realizing that there would always be trouble in the palace if Absalom lived, David’s captain killed Absalom.

How can God look at this sinful, mistake-ridden man with love? How can a holy God overlook David’s sins so much that He called David a man after His own heart? And why was he the only one to receive that title?

The answer lies in David’s heart.

Have you ever peeled or cut a perfectly good-looking onion only to find the center dark and mushy? It sure looked great on the shelf, didn’t it? But what it looks like doesn’t matter when it’s what’s beneath the skin that you need most.

When all of the onion layers are peeled away, what is at the very core?

So the king said to Joab and the army commanders with him, “Go throughout the tribes of Israel from Dan to Beersheba and enroll the fighting men, so that I may know how many there are.”

3 But Joab replied to the king, “May the Lord your God multiply the troops a hundred times over, and may the eyes of my lord the king see it. But why does my lord the king want to do such a thing?”

Numbering the troops and strongman of Israel was a problem of pride. It’s pure statistics. A high number of men meant that David could pat himself on the back for the kingdom he had built – measure his own abilities. But just as it goes in business, statistics are not the only measure of success. At the end of the day, is it statistics and numbers that build your success?

Unless the Lord builds the house, they labor in vain who build it; unless the Lord guards the city, the watchman stays awake in vain.”

Counting the men completely disregarded the power and might of the Lord, and the many, many times He had rescued David despite the odds. David’s own self-reliance had become greater than his reliance on God.

4 The king’s word, however, overruled Joab and the army commanders; so they left the presence of the king to enroll the fighting men of Israel.

8 After they had gone through the entire land, they came back to Jerusalem at the end of nine months and twenty days.

9 Joab reported the number of the fighting men to the king: In Israel there were eight hundred thousand able-bodied men who could handle a sword, and in Judah five hundred thousand.

For nearly ten months, David waited to hear how mighty his army was. But the minute Joab returned with numbers, David knew he’d screwed up.

10 David’s heart condemned him after he had counted the fighting men, and he said to the Lord, “I have sinned greatly in what I have done. Now, Lord, I beg you, take away the guilt of your servant. I have done a very foolish thing. ”

He couldn’t take back what he’d done. The only thing he could do was repent, ask forgiveness, and wait for God to respond. Verses 11-13 tell us,

11 Before David got up the next morning, the word of the Lord had come to Gad the prophet, David’s seer: 12 “Go and tell David, ‘This is what the Lord says: I am giving you three options. Choose one of them for me to carry out against you.’” 13 So Gad went to David and said to him, “Shall there come on you three years of famine in your land? Or three months of fleeing from your enemies while they pursue you? Or three days of plague in your land? Now then, think it over and decide how I should answer the one who sent me.”

Here’s where we see David’s true heart. Here’s where the onion layers are peeled away and we see exactly what is at his core:

14 David said to Gad, “I am in deep distress. Let us fall into the hands of the Lord, for his mercy is great; but do not let me fall into human hands.”

At his very core, no matter how many times he screwed up, David loved God. He also had a respect for God, and when he screwed up he took responsibility for it. There was no finger-pointing, no excuses. It was just David throwing himself and his sins onto the merciful feet of God. When it came to choosing a punishment for his sin, David trusted that even in omnipotence, God’s mercy and love was a far better punishment than any other he could face. And he was right.

15 So the Lord sent a plague on Israel from that morning until the end of the time designated, and seventy thousand of the people from Dan to Beersheba died. 16 When the angel stretched out his hand to destroy Jerusalem, the Lord relented concerning the disaster and said to the angel who was afflicting the people, “Enough! Withdraw your hand.”

And then David did a remarkable thing. He acknowledged that even though he was their shepherd, his sheep deserved mercy, proposing that he take the brunt of the pain.

17 When David saw the angel who was striking down the people, he said to the Lord, “I have sinned; I, the shepherd, have done wrong. These are but sheep. What have they done? Let your hand fall on me and my family.”

Remind you of anyone? You know, a King, a shepherd who wanted to take on punishment of His sheep so they could be spared?

And then David gave his best.

He purchased a plot of land from a man named Araunah. Araunah was ready to give him everything he needed. He offered oxen for the burnt offering, wood, and all of the tools he would need, for free to his king to prove his devotion.

But David needed to prove his devotion to his King. Verse 24 says,

24 But the king replied to Araunah, “No, I insist on paying you for it. I will not sacrifice to the Lord my God burnt offerings that cost me nothing.”

And don’t we do that sometimes? Offer up sacrifices that aren’t really sacrifices? Offer partial goodness to a God who deserves much more? Make excuses for why we sin, or never really repent because we don’t want to face the consequences or punishment?

David earned the title “A Man After God’s Own Heart” because he was deep down to his very core, devoted to his Lord.

It means that when you peel away the layers and look at the very onion core of your heart, is it good? Is it pure and good, with a true love for the Lord? Or does it just have a good-looking shell?

Praying for you,
XOXO,
Karen