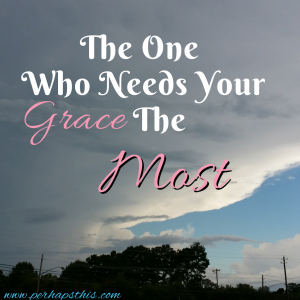 This morning was the umpteenth morning in a row that I was awake at 3 am. The who-knows-how-manyth time I fell asleep sitting up on the couch before 8 pm compared to my normal bedtime of 11:00 or later).
No one is sick,  praise God. No one is homeless. Praise God.
I woke up this morning with 10 things on my list…
All of these things are swirling through my mind. These things undone and/or unfinished. Halfway through slicing the party rolls I discovered that there was in fact NO dijon mustard in the pantry. In a moment of insanity I think, No big deal, Karen. You can do this!
There I am in the middle of my kitchen Googling how to make dijon mustard for two potlucks… one that I’d already RSVP’d and said I wouldn’t attend, and the other for a group that had already agreed to cater sandwiches.
Yes. I was preparing to make sandwiches for a group that is already catering sandwiches and a group that I’d already said I wasn’t coming to. Because party rolls are not sandwiches,  they’re party rolls and because if I’m making one batch of party rolls how much harder is it to make two. Really.
What is the matter with me?
What started as a trip down the rabbit hole this morning would by lunchtime end in the most unlikely of places. At the door of grace.
To an outsider, it probably looked a lot like anger, when I put (okay shoved) the unfinished rolls back in the wrapper.
To the hubs it must have looked like desperation. Especially when I came into the living room where he was putting his shoes on.
Especially when I stood in front of him and picked his big manly arms up and wrapped them around my waist… which usually happens when I need a hug. Or help. Or for him to go to the post office. (“Oh no. What do you want,” he says.)
Especially when I kissed his bald head (“No, I’m not going to the post office today,” says the man who I have sent to the post office four times in three days.)
Especially when I kissed his bald head again (“What do you want, woman?” he asks with one eyebrow raised. He knows what’s up.)
But it was neither anger nor desperation. It was just me, laying down all of the balls I shouldn’t be juggling to begin with.
“Please go to town and get us a Christmas tree,” I whisper. “This is our worst Christmas ever for the kids and we need something.” You see, we haven’t even done anything Christmasy. No lights. No Santa village. We haven’t volunteered at a soup kitchen or bought a goat for a WorldVision family. Who is this strange family? Certainly not us. This is not us. We know it, and the kids know it.
On the way to work with only the wrapped gift box in tow – no party rolls, no other party rolls – just me and my gift box… the Holy Spirit whispers into my heart.

Why are you so willing to give others the grace that you can’t give yourself? I don’t place all of these expections on you, why do you?

Exhale. Take a step back.
Oh no He didn’t. “But I should be… but I should do… but I’m expected to,” swirl the thoughts.

How much of that did you take on yourself? So you didn’t make party rolls. Do the things that matter.

*******
Two hours later I was sitting on the front bleacher seat at the elementary school, waiting for the school’s Christmas program to start. Except the third graders were all IN the bleachers. And there was a giant empty space in the floor where they would have fit so all the mamas could see their sweet babies.
Instead, mamas of 3rd graders got to turn sideways and see only the kids on the end of the row. Certainly NOT the GTs,  who are half a head shorter than the rest of their class, and seated somewhere in the middle.
For a good hour afterwards, I grumbled and complained about the teacher who made them sit up there (long story) and what could possibly be the matter with her and doesn’t she know we need to see our babies? Twenty minutes of deep breathing later, I gave this woman the only thing I felt would fit. Grace. I told myself, “It’s the holidays. Maybe she was stressed. Maybe she was this, maybe she was that. Maybe it was LH that drove her to exhile the entire 3rd grade. We don’t know why. It’s not the end of the world that I couldn’t chronicle this moment on social media.”And dadgummit, if I don’t hear that voice again, “It wasn’t as important for you to see them as it was for them to see you.”
Bring on the tears.
You see, earlier in the day I’d half convinced myself that I didn’t actually need to be there. Shameful, I know. What mother even does that? I hesitated to even write it here. I’d convinced myself that the things that didn’t matter (like party rolls) did, and the things that really do matter didn’t (like being at a Christmas program.)
How backwards is that?
And worse yet… how often do we do that in our everyday walk with God? Add more things that don’t matter, when He’s calling us to do only the one or two things that do?
There will come a time, maybe Christmas, maybe not, when you’ll step back and ask yourself why you’re googling “How to make dijon mustard” for rolls you’re making for a party you already said you weren’t coming to. Maybe not exactly.
But you just might find yourself in the middle of your kitchen, with your hands in the air as your heart whispers to your Savior, “Please rescue me from me.”
And he will scoop you up, dust you off and give you the grace you refuse to give yourself.
He'll whisper that the greatest gift you can give him is not in your to-do list. It's YOU. Click To TweetYou. Your thoughts. Even your to-do list itself.
He’ll reset your priorities in case you have party rolls too close to the top, and Christmas programs too near the bottom. And he’ll give you what your heart is longing for – a fresh pitcher of grace poured on the one who needs it most. You.
She is free… to receive grace,