I’ve been on a cleaning spree for the past week. Bags upon bags of broken things, old things, and no-longer-useable things have amassed to the tune of six 40-gallon trash bags.  I can, however, finally see the floor–bliss!  In all this cleaning and rearranging, it occurred to me that I should find a home for the scooters that the children got for Christmas this year. (You know, the ones they’ve been riding up and down the hall now that the hallway is devoid of laundry, which I was able to finally put in the laundry room after tossing out six… never mind.)

The perfect spot is right behind the door. Which means moving the shoe and coat racks over just a few inches.  Which also means picking up all the shoes that are on the floor, and putting them on the rack. Remind me to clearly define Nathan’s chores for him in the future, rather than simply stating “put the shoes up”.

I hung shoe after shoe, until I came to these: My old work shoes. By old, I mean three months ago.  As I set one aside, I found myself looking for the other one, thinking “I’ll hold onto these, just in case…” Just in case. Just. In. Case. 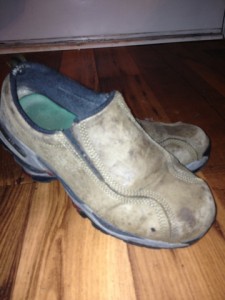 And then it hit me like a ton of bricks. I didn’t really mean just in case. In the back of my mind, I wasn’t really saying I would hold onto these just in case I need them. Translation? I was going to hold on to these so that in two months, or three months, or four, when I fail at working from home, I won’t have to buy new shoes, I’ll just pull these out of the closet, where they’ve been waiting for me so many months. Not if, but when.
When I fail (because I will).
When God fails (because he will).
When I lose patience and give up, assuming that quietness on God’s part means I’m out in this big world by my lonesome.

It wasn’t three hours before that I’d sent the kids off to school with their daddy, and settled down for a fresh word from heaven. I ended up in Mark. Mark 4 to be exact, you know it as the parable where Jesus calmed the storm.  The disciples had been in the boat, off in the middle of the sea when an angry storm came up.

That day when evening came, he said to his disciples, “Let us go over to the other side.” Leaving the crowd behind, they took him along, just as he was, in the boat. There were also other boats with him. A furious squall came up, and the waves broke over the boat, so that it was nearly swamped. Jesus was in the stern, sleeping on a cushion.

The disciples woke him and said to him, “Teacher, don’t you care if we drown?” He got up, rebuked the wind and said to the waves, “Quiet! Be still!” Then the wind died down and it was completely calm. He said to his disciples, “Why are you so afraid? Do you still have no faith?”
They were terrified and asked each other, “Who is this? Even the wind and the waves obey him!”

Two things stuck out at me. First, in verse 37 and 38, the disciples woke Jesus up when the storm was so bad that they thought surely they would die. It was unbearable. How much are we like the disciples, waiting until life nearly breaks us before we ask for help. They said to him, “don’t you care if we drown?” Have you ever thought the same thing? Hello!  Need some help here!  Don’t you care that we’re in this mess? How can you be sleeping when we’re way in over our heads, we can’t handle it, the kids are on red every day at school, they’re fighting over this and that, this bill is due, the car’s broken down, where were you in the recent tragedies, where were you when a friend lost his job… God, don’t you care?
The disciples didn’t want to wake him because they were fishermen. They knew the sea.  They didn’t need Jesus. I’m sure their pride told them they could handle it. After all, mine does all the time. And we, especially women, we take on more and more until we come to the breaking point, and look up at heaven, screaming “Where are you God? Don’t you care?”

Of course God cares. His answer to them is the same to us. Just because we think he’s asleep doesn’t mean he really is. He sees all, and knows all, and is busy working on the front of our tapesty of life, when all we see is the torn and tattered backside. How much better is it when we come to him, on a regular basis and tell him what’s going on in our day, and how we’re feeling about that looming storm?  I know I have walked up to that stern many a time, storm clouds looming out at sea, and nudged Jesus “Okay Lord, I’m gettin’ just a liiiiittle nervous about this. Are you sure everything’s going to be okay?” And then some time later, I’m back at the stern, making sure Jesus is awake, telling him about that storm I *still* see on the horizon. I do have faith. But sometimes I need to remember that the very same God who performed these miracles and spoke to his people is also MY God, that he’s never failing, and that the same God didn’t die off, replaced by a weak and indifferent savior.

Second, in verse 41, they asked each other “Who is this?” You see, even though the disciples knew Jesus was the Messiah, they didn’t yet know him as their Messiah. He was good at speaking to others, fixing their problems, and healing them, but the disciples needed a reminder that Jesus was their Savior as well!  Better yet, the very same God that is written about is MY God, and sometimes that is so hard to remember.

I have a dear friend who will meet me for lunch now and then. She’ll ask “Are you limiting God?” Usually I say no, but in this case, I think maybe I am! In holding onto those shoes, just in case, I’m assuming there’s no chance for me, no hope, and that I’ll need those in a few months. They’re my pacifier, my security blankie, my crutch. Just in case I fail.  Isn’t God worth my complete and total faith in him?

So, that said, I am tossing the shoes. I’ve donated the old work clothes, the work khakis, and now, in faith, I’m getting rid of my shoes. It’s scary to trust God fully, I know. It’s scary to rely on someone other than yourself to make things happen. But true faith demands it, needs it, longs for it, because what is our faith good for, if not to trust the very one our faith is based on? (Did you just hear that collaborative sigh from heaven, along with the word: “Finally! I think she gets it!” or is that just me that heard it?)