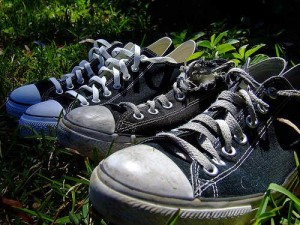 My heart is sad over the loss of Robin Williams this morning. For my friends in other countries who may not recognize the name, he was an American actor and comedian who recently committed suicide. The nation was shocked because he played roles that were funny. He was known for playing family roles, heartwarming roles, and roles that were both. No one could understand why or how this happened, since he has had a successful long-standing career and even had four future films that are already complete waiting for the world to see them. Without an enemy in the world, you’d think he’d have it all, yet here was this icon who was battling depression. What did he have to be depressed about?

The internet, twittersphere, and everywhere else errupted with viewpoints from everyone and their brother who wanted to spout off their two cents on how suicide is the selfish option. As unpopular as my non-Hollywood opinion is, I don’t for one minute believe that suicide is selfish. I think it’s the best (not only; best) option the person believed they had at the time. We don’t know what someone faces each day unless they tell us. And when they tell us? If they tell us? It’s not our place to brush it off or make them feel as if they should move on. To place your soul at its most bare condition in the hands of someone else without fear of judgment is the most vulnerable position a person can place themselves in. And to do it voluntarily? Whoa.

A few weeks ago I was volunteering with a homeless ministry. There was a homeless man that approached me and I asked him if there was anything he needed, or anything I could pray with him over. He said yes, pray for his heart. His sister and mother had passed away and he was suffering from a broken heart.
I almost did the worst thing ever.
I almost asked him “Is that it?”
I couldn’t imagine that losing a sister and a mother would cause that much depression. I resisted counting in my head how many immediate family members I’ve lost over the years, including parents and siblings. But this man did not need me to tell him “You’ll be fine,” because clearly, he was not fine. Thank goodness, I didn’t ask him that. I listened to him and my heart immediately broke for him, for the simple fact that he’d known a love so great that when it was gone, he was never able to rebuild his life. The hole they’d left in his heart was never filled. Fighting back tears, I prayed for him, that God would heal his heart while he was breaking mine for this man.  I am sure at that moment, the Holy Spirit took over and spoke words that I could not get out to Heaven on behalf of this man. That was weeks ago, and I STILL have this man on my heart, and how his heart is broken for his mom and sister.
You know what? I don’t know their relationship. Their dynamic. It is not my place to judge how, why, or how long someone grieves, how they cope, or how they survive.
It’s not our place.
Likewise, it’s not our place or our right to say ugly things about someone who commits suicide. We don’t walk in their shoes, we don’t know their loves, their losses, their coping mechanisms, or what went through their head 24-7. Our interaction with them was a mere glimpse into the total person that they were.
After the initial shock of Robin’s death reverberated through the nation, we later heard in the news that Robin had been in the early stages of Parkinson’s. All who judged right off the bat had to take a step back and add even more cause to judge, even more reason to say “well I had a neighbor’s cousin’s mail carrier who got Perkinson’s and HE coped okay.” Again, you don’t know. You don’t know the full story. No one knows or loves a person, flaws and all, more than their creator and He, yes he, is the only one who gets to judge any of us.
I won’t lie. I am still sad that Robin chose to take his life. He brought me joy, and tears and good times on the couch with my own loves in front of the tv and big screen. And there are people out there who will say, “Karen, why do you have to be sad for a celebrity? You don’t even know him. He was just an actor (because God places less value on an actor’s life than anyone else’s?). Why aren’t you sad for homeless cats, or elephant poaching, or Uganda, or Asia, or…” and there we go again, making assumptions and putting our own fences around someone else’s territory. Just like I almost did with my homeless friend, we are all quick to judge when we aren’t walking in their shoes.
Let’s talk about shoes for just a second. Maybe we aren’t meant to walk in their shoes. Maybe we’re meant to notice their shoes. To lend a hand to those who need a hand, or lend an ear or a shoulder to those who need to cry. To lift the spirits of one who feels broken and suicidal. To help the family who is struggling to make ends meet by buying them bathroom tissue, or to show compassion to a little girl who may not have anyone else in her life to show it to her, or to play with a disabled child that no one else will play with. Walking in their shoes doesn’t help the person who has to wear them. Yes, you’ll be more empathetic, but it won’t change the fact that they’re still wearing the same shoes.
So don’t. Or rather, don’t let that be the only thing you do. Start by taking notice of their shoes, and then take a small step of your own to get them a new pair of shoes to walk in. We don’t have to fix everybody. But if we take our eyes off our own shoes for a minute and look at everyone else’s, not only will we be more grateful for what we have, but moving our focus to someone else’s needs will prick our heart for what pricks God’s heart, including actors, and cats, and Asia. Perhaps we’ll even  get to help someone else along this life journey. It’s an awesome feeling to see someone walk a new way and know that you had a hand in helping them with their new shoes.

God will provide the who, why, and what, if we’ll provide us.