Earlier this year, I was part of the Raising Generations Today Writing Team. I thought I’d share a post from January 26th. 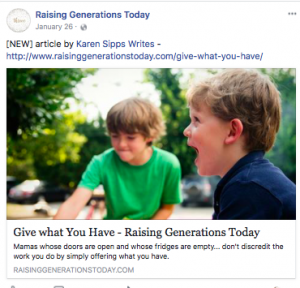 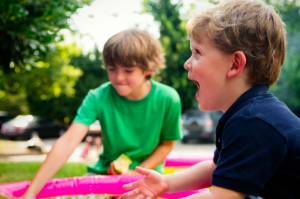 This year for their birthdays, my kids decided that instead of having a big party, they preferred to have a sleepover with one or two favorite friends.

My daughter had her sleepover on a Saturday and invited one friend. Somewhere along the way another girl was added, and one friend became two friends.

Then the following week her twin brother invited his friend over. As soon as his friend settled in, the raiding of our fridge began…

This reminded me of a couple of years ago when I seemingly had the entire neighborhood in our game room at one time. I marveled how we could go through a 4-pack of bath tissue so quickly, and I selfishly asked God to remind these kids to go to the bathroom in their own houses before they came to ours, because if they used all of our bath tissue we wouldn’t have enough for ourselves.

Those were different times though, and I was a different mom then.

I have learned since then that instead of asking God to make these kids use the restroom somewhere else that day, I should have been asking God to provide as much bath tissue as we’d need for everyone. So I did…Now we buy our bath tissue in bulk (and our snacks too), because I don’t want to limit what God can do through the blessings of open doors and unlimited toilet paper.

Now, back to this boy. After a night of video games, Chinese food, movies and then breakfast the next morning, we piled into the car to take him home. When we got there, however, there was no answer at his house. So, of course, we took him back to our house, where he stayed over another night, then we took him to church the next morning.

“How is it fair that he gets a TWO-NIGHT sleepover when I only got one?” my daughter asked.

* “If you must know; two children for ONE night is equal” (in my mind) “to one child for TWO nights. Two equals two. Simple math, Pumpkin.” *

After church my son’s friend asked if he could move in with us. And change his last name to ours. Even offered to do chores for us.

Of course we took him back home, because he has a family that loves him. But he knows he’s welcome at our house, and if he spends the night on a Saturday, he knows to bring clothes for church.

But what if we’d just stubbornly parked outside his home until his parents returned?

What if we enforced a no-sleepover policy on Saturday nights?

Who knows, one of these Sunday mornings this boy could come to Christ and lead his family to do the same down the road!

And, truth be told, my hope is that if that happens, it will have been through our love for him and the open fridge we offered him for those twelve or so hours before we ever stepped foot into church.

Mamas whose doors are open and whose fridges are empty, don’t discredit the work you do by simply offering what you have. Be it an open door, a couch to sleep on, a soothing response, or extra bath tissue. You may never see this side of heaven what God does with your sacrifice, but let Him be the One who multiplies the offering you have.

Give what you have, and watch Him do the rest.

I planted this rose bush twenty years ago. I bough