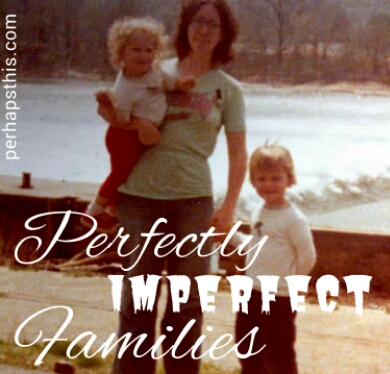 Look how adorably messy my hair was back in the day. Just like today, as a matter of fact.

This is a story about my (im)perfect family. About sacrifice. About love.

Everyone hears about the perfect family. A loving mother and father, two-to-four kids. But “perfect families” are the rarity these days, and what you have in reality is one big hot mess of humanity, stepping on everyone’s toes, breaking rules, and now and then wishing they had any family but their own.

My beautiful “Gram,” from a picture on the end table that I would dust every weekend. She was the picture of grace and beauty in this photo.

See this lady? She’s the start of my imperfect family. Not the cause of imperfection. But the start of family. My grandmother, on my father’s side.  She had already raised her kids when I came along. Circumstances led to circumstances, and when I was five, I went to live with her. For a good ten years it was just the two of us and she became the only real mom I’d ever known. She was disabled, and truth be told, we were poor. Food stamps, government cheese, subsidized housing. You name it. We had it. My favorite was when our “case worker” would come visit the house to make sure we were following the rules – whatever those rules were. Just kidding. It was not my favorite. I always worried that they would see something out of place and drag me off to live somewhere else, or that maybe my grandmother would just be tired of taking care of me, and hand me over to someone else.

We didn’t have extra money for sports or extracurriculars or eating out four times a week. But because we didn’t have money to eat out except for special occasions, and because she couldn’t stand at the stove for long periods of time, I learned how to cook from even before I could reach the stove. Those mad cooking skills served me well when I married the hubs, trust me.

Back before cartoons were on 24/7, kids watched their favorites on Saturday morning. Except me. I couldn’t watch them until my weekly chores were done. On Saturday morning. I scrubbed floors on my hands and knees every single week, dusted knick knacks, vacuumed, and washed the laundry. At the time, I would have killed to be watching tv, but now as a grown up? No matter how many times I Swiffer it (sorry, Swiffer) no mop holds a candle to a hands-and-knees scrubbed floor, and I’m probably one of the only adults I know that can properly fold an entire sheet set or have a day-long conversation with an older person and not think anything of it.

I’m not saying I had a hard life. I’m saying that life with my grandmother developed my character and made me who I am today and for that I am grateful.

She was the one who taught me by example, to believe that God would always be there for me even when I couldn’t see Him.

She never took my mediocre, always demanding my best, whether it was grades, cooking, or even cleaning.

We played board games every day after school, watched The Wonderful World of Disney and every single black and white movie known to man on tv, and when my uncle returned from the army and moved in with us, I *almost* had a perfect family. He taught me to drive a stick shift, screened my boyfriends, and made sure I respected my grandmother. Yet I never saw what I had, because I still wanted what everyone else had. A “normal” family with “normal” people who didn’t have to tear food stamps out of a booklet to buy food. A normal kid who could do extracurriculars and have their family take them to sporting events and cheer them on. You know. Normal. It may have been normal for me, but I still coveted every other family in the world. I wanted what I didn’t have – a family. I was never adopted, she just had legal “guardianship” which always left a hole. She couldn’t be normal cookies-and-aprons grandma because she had to fill the role of mother, yet she couldn’t be young and youthful like everyone else’s mother either.

She didn’t have to raise me, but she did. There wasn’t anyone else that could. She took what should have been her “golden years” and used them to try and mold a stubborn, independent, broken child into a responsible, respectful young woman.

When I was in college, God started rebuilding the relationship I had with my mother, and I remember realizing that choosing to heal that bond with my mother would likely create a rift in my makeshift “family”. I didn’t care.

I was seeking a plug for a mom-sized hole that only Jesus could fill.

I’d like to tell you I forgave my mother instantly. I tried. For years, I tried. I opened the door to my heart but kept one hand on it, just in case I needed to slam it shut again. Even when my grandmother passed and I thought that every hurt she’d carried in taking on someone else’s burden thanklessly could finally be buried, it wasn’t. There was still a hole. Still judgment. Still blame. 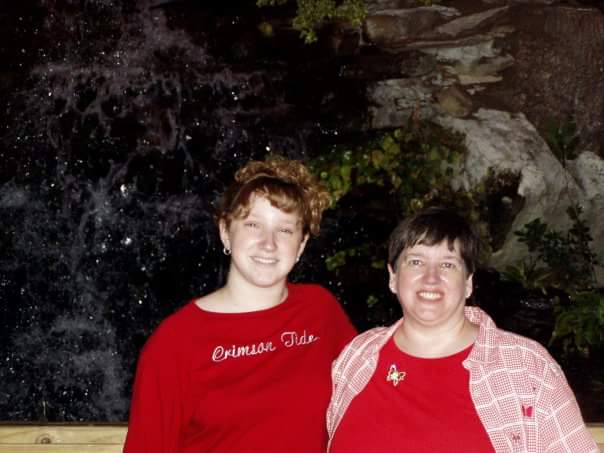 My mother and I, before grandkids along. Approximately 1/4 the way through the hurt pie.

I’d like to tell you that when my own kids came along, there wasn’t a bleeding wound in my heart that screamed every time she asked to spend time with my children but that would be a lie. After all, what did she do to deserve their love?

(Let me to interrupt this store by telling you that this Crimson Tide shirt was a gift right after we moved to Alabama. Back before I knew better. And that’s all I’ll say about that.)

Forgiveness is like having two pie plates. In our hand, we have a pie plate full of pie. We cut out a slice and place it onto Jesus’ empty pie plate. Don’t underestimate it, it’s a HUGE step to cut off a 1/4 of the pie and hand it over to Jesus. “I have forgiven enough,” we say. We think it’s enough. But that empty space in our pie plate is just the beginning, and we find that the hurt is still there.

So we give God more pie, and we forgive a little more. “Maybe that’s enough forgiveness,” we tell ourselves. Still, we think it’s enough. Is it? Or is that wound still left unhealed?

A few years later? God gets another slice, and our own pie plate gets emptier and emptier. Funny thing about pies. The more of our hurt pie we give to Jesus? The tighter we clutch the pieces we have left. The stronger we hold onto the reason for our anger, our hurt, our pain. And you will hear the sermon at church over and over that says, “Forgive, because God forgave you” and you will totally think that you have forgiven. Almost all the way. Except you’re still clutching that pie plate with the last three forkfuls of pie.

One day you will look at your pie plate, and you’ll see that last sliver. The one you’ve been holding onto for decades. And you will hand that pie over to Jesus, plate and all. And there will be an amazing weight lifted off of you. The details of how and why no longer matter, it’s just replaced with grace. But hear me when I say that grace is not something you can give unless it’s something that you have. And the only way you can have grace in place of hurts is when the Giver of Grace replaces your “hurt pie”.

For Him to do that? You have to give him the entire pie. Plate and all. 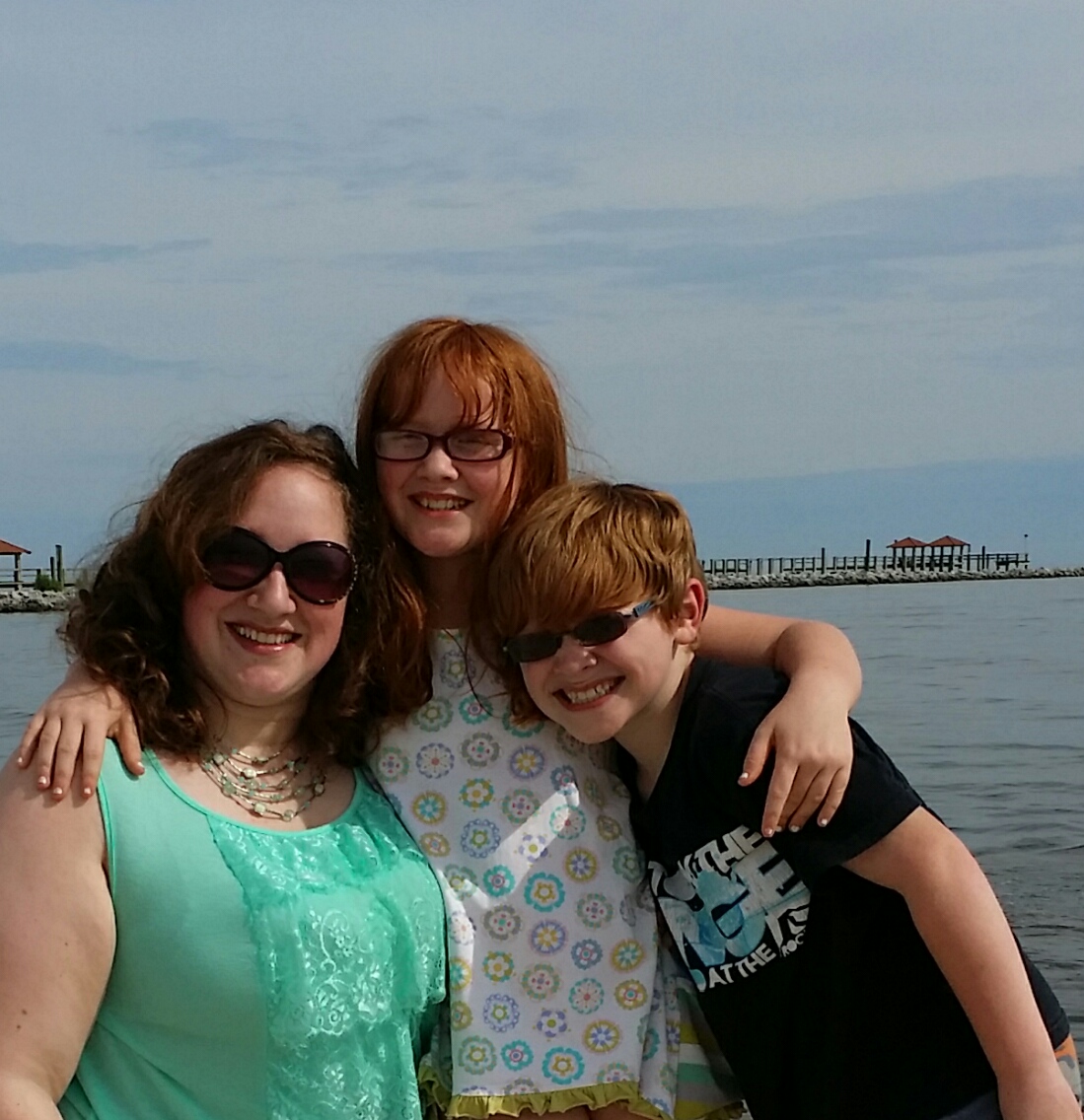 So let me tell you about my imperfect family. This is me and my littles (daddy’s the one taking the picture). We screw up. We make mistakes. We try hard and don’t make it. We try again. We love. We live. We mess up. We forgive.

I cook for them and clean for them the way my grandmother taught me, and welcome them in the meal preparations just as she did. I push LM to be her best because I know she can do better, just like my grandmother knew I could do better. I honor their spiritual gifts and encourage them to choose a career based on God’s desires for them, which is not the way I grew up, and that’s okay.

I cheer at their sporting events, and feel so honored that God would allow me the funds to be able to give them that gift. I respect their daddy, and give them the gift of a unified front, supporting his parenting decisions because I know he has their best interest at heart. 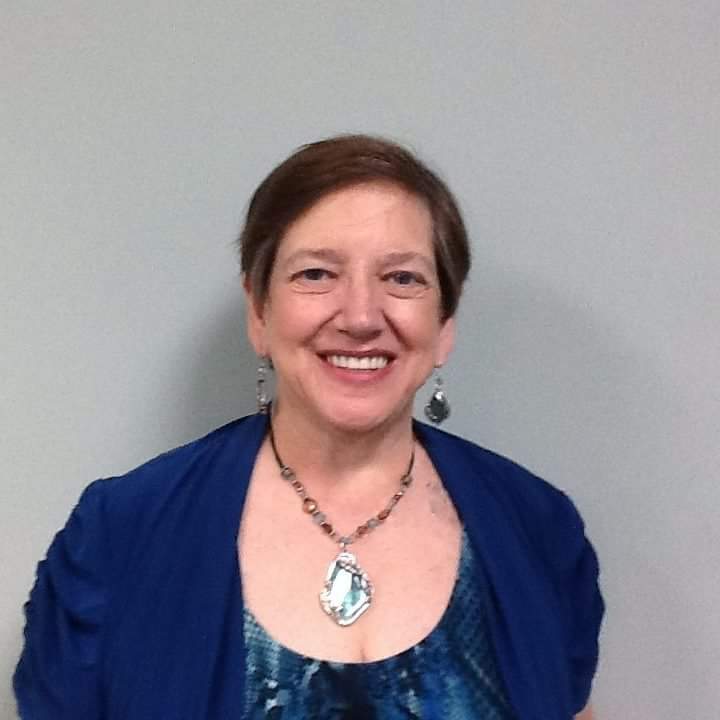 And this is my mother. She reminds me to how to love unconditionally, how to truly forgive, and how to invite grace as a long-term resident in my home. We don’t have a long history from my childhood, but I welcome her into the lives of my own children, and wouldn’t replace her with anyone else in the world. She is my biggest cheerleader, just like I am for my own kids.

Like any mom, she has those moments where she does things that drive you crazy (like singing in the car, shh don’t tell her I said that) but I wouldn’t trade her for anyone else, and could not imagine not having her in our lives.

It is the two of them – my mother AND my grandmother – that make me who I am today. I used to think that in an imperfect family, you had to choose who to honor. To honor my grandmother would be to ignore the healing that my mother and I were working on. And to honor my mother would be disrespectful of the struggles and sacrifice that my grandmother withstood to raise me. Folks, neither of those are the truth. You don’t have to choose who to honor. In honoring one, you don’t have to dishonor the other. You can take the best of both and honor each for the beautiful women they are and the contribution they’ve made to your character. Honoring your stepdad doesn’t dishonor your father. Honoring your uncle doesn’t dishonor your grandfather. Honor each person who has made you you for their own reasons.

If your family is imperfect – whether you’re a blended family, a broken family, have angel babies in heaven, or have no family left on earth at all, know that God’s grace lives in imperfect families. His grace lives in makeshift.

God’s grace lives in adopted grandmas who may have never had babies of their own and relish your visits to see them in the retirement home.

God’s grace lives in those who grew up in the foster system, who would have done anything to live in my imperfect family.

His grace lives in honorary aunts who love their nieces as much as their own babies.

His grace lives in the homes of your friends whose parents let you spend the night at their house more than you stayed in your own.

His grace lives anywhere His children live, no matter what your family looks like.

I'm not sure how you found me, but I'm glad you're here! Grab a drink and a seat as we get real about God's Word, our own faith, our purpose, family, the crazy journey of special needs parenting, and walking daily with a whole lot of grace.