We study: The Creation, Eden, Adam and Eve, Cain and Abel, Lamech, wickedness, Noah and the Ark, the Flood, the Tower of Babel and covenant with Noah

Chapters 7-11 is where I tell you how much I underestimated God.

We’ve all seen them. The cutesy arks with the giraffes and elephants – heads poking through the tops of the ark. 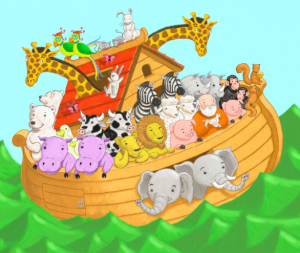 In my mind, the ark is big, but it’s not that big.

Several times a year, my family visits a friend-who-should-be-family at his pristine home in Kentucky. Our goal? Get in. Give hugs. Destroy as little as possible. So. Not. Kidding. This particular trip, we planned our New Years Eve festivities around visiting the Ark Encounter, in Williamstown, KY. This is the part when I admit how very little I know about God and what it means to be Him.

We pull up to the Ark Encounter, and the first thing I realize is that, from a mile away, this thing towers over the area. I’m absolutely in awe of how big it really is. And in my head, the one thing I am thinking is, Wow. Noah’s friends and neighbors must have thought he was nuts.

Going through the Ark – I won’t spoil it entirely, but again, I’ll admit my naiveté. God’s word says just this:

So make yourself an ark of gopher wood; make rooms in it and coat it with pitch inside and out. This is how you are to build it: The ark is to be three hundred cubits long, fifty cubits wide and thirty cubits high. Make a roof for it, leaving below the roof an opening one cubit high all around. Put a door in the side of the ark and make lower, middle and upper decks.

In my mind, there are three decks, with wild animals roaming all around, smelling like the circus when it comes to town. Because that’s as creative as I could get. But once in this encounter, I realized that the God who orchestrated bringing the pairs of animals to Noah would have certainly given Noah ideas on how to accomplish this, as well as made him think of other provisions as well. (Places to pray/worship, living quarters, etc) 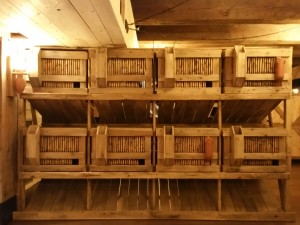 Here’s an example of housing for small animals. The back would have had feeding troughs, where each person on the ark could simply go behind and feed all the animals at once! 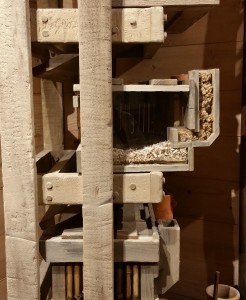 It also made me remember that when God has a plan, things happen – people come together – in ways we can’t understand.

1. God brought the animals to Noah. Two pairs of unclean animals, and seven pairs of clean. God gives the Israelites instructions in Leviticus 11, and defines for them which animals are okay to eat and sacrifice (clean animals) and which are not (unclean).
2. When the rain came, it flowed from the ground up, and the sky down, raining for 40 days, but it took a year for the flood waters to recede. There wpuld have been nowhere to hide, no cave to hide in, no mountaintop to climb to. We know that Noah first entered the ark on day 17 of the second month and left the ark on day 27 of the second month the following year. Everything the humans and animals needed would have been packed up on the ark!
3. We always see full-size animals on the ark, but the Ark Encounter presented another completely logical theory – if the animals were juvenile, they would take up less space on the ark, they would need less food, leave less waste, and be able to reproduce after the flood waters had receded!
4. Each kind of animal came to the ark, but that doesn’t mean a Noah brought poodles, and Rottweilers, and Golden Retrievers. he brought a dog “kind” that covered that particular “type” of animal. 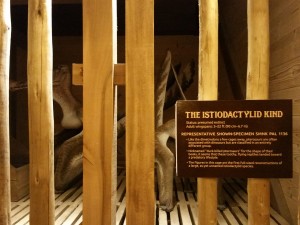 I love the descriptions of “kinds” of animals on the ark that represented a group of animals. I mean, how creative is God? 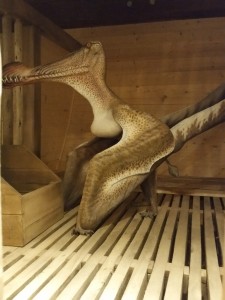 Nakedness in the tent

In Chapter 9, we see Noah passed out in a drunken stupor. Perhaps it was the stress of living in a floating zoo for a year, or being the only humans around and needing to repopulate the earth, or perhaps he just liked wine. Perhaps it was the enormous weight of realizing there was no one else. Whatever the reason, Noah had had a lot of it when his son Ham walked in on him.

Now let’s say you’re a designated driver, and you accompany a friend to an event. Afterwards, you find them drunk and naked. Do you:
✔ Get them dressed and take them somewhere away from the club to sober up?
✔ Stare, then leave the room and tell everyone else that your friend/relative is still in there, and still naked.

Chances are, if you like or respect that person even a tiny bit, you’ll want to cover them, protect their dignity, and ensure that no one else walks up on them. Ham, on the other hand did not respect his father. He saw him naked in the tent, left him naked in the tent, and then came out to make fun of Noah to his brothers. For his selfishness, Noah cursed his grandson’s future line (Canaan).

Point to Ponder: We see in Chapter 10 that Canaan was the father of the Canaanites. He was also the father of the Amorites, Jebusites, Sidonians and the Phoenicians. It’s interesting to note that all of these groups would wage future war against the children of Shem and Japheth. Is this a revelation of their true hearts, or were their wars a result of the curse?