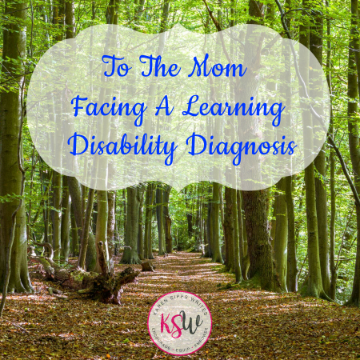 There’s this path we’re all on called Motherhood. In the beginning, most of us set out following the same path. Hospital. Birth pictures. Going-home outfit. Strapping the sweetest little bundles of heaven into these gargantuan plastic carriers, designed specifically to keep those bundles safe.

Everything we do is for them from that point on. The right bottles. The right binkie. The perfect crib, and the softest blankets.

We feed and clothe and stroll down the Motherhood path with lots of other moms joining us on the path now and then. In the end, we’re all heading in the same direction.

You are desperately trying to stay on the same path as everyone else, but elementary school angers you and friends and teachers whisper and you just want to cover your ears and make it all go away.

I wanted to fix him not for me, but for him. For his friendships and for school and for society so he could fit in and do well and so the people behind us in the pew at church wouldn’t chastise him while I sang in the choir loft.

For the first week after reading his diagnostic report, I took deep breaths and prayed it away. I thought about his future wife and future career and college plans and prayed that God would allow us back on the Motherhood path because clearly we took a wrong turn somewhere.

Clearly we stopped to smell the roses and the rest of Motherhood left us behind, and now we are lost. Plumb lost in unfamiliar territory with no GPS and we can hear the Motherhood-path moms, we just can’t see them.

So I prayed. I prayed and prayed and held my breath and researched the oils that could fix it all and wondered about IEPs and school meetings and 504 plans and tutors. And then one day I caught myself – and you will too – when God whispered right down into the deepest parts of my soul,

“There’s nothing to fix, because he’s not broken. I made him this way on purpose.”

I stopped trying to fix him right then. I stopped wanting to fix him. That’s the day – and you’ll have it too – when you remember that labels have no place in the home. Labels are for advocacy only. You’ll stop worrying about what to do in school when he’s not in school. Because at the end of the day, the sweet boy or girl you love is the same kid they were the day before the diagnosis. The same kid who is hilariously funny, who snuggles, leaves love notes on your pillow, and makes his own spice mix for cooking. He needs to know that when the world sees him as X, Y, or Z, YOU just see him as loved.

That kid of yours? The one with a new diagnosis? He’s the same kid you’ve always had. See, God’s word says,

“I knew you before you were formed. I knit you together in your mother’s womb.”

Before he or she was knit? God chose YOU. You are exactly who they need to get them through this world. Your strength. Your love. Your advocacy. YOU were hand-picked for this.

And one day you’ll be standing in the middle of the mall, thinking again about his future career. And you’ll reason with yourself. “Maybe he’ll be this. He could do that. And God will stop you mid-sentence and do that thing one more time and say to your soul,

“Don’t you dare limit him, because I am not.”

And you’ll stand up. You’ll be taller. And smarter. And firmer. And you’ll realize that God has BIG plans for him that you’ll need to support. You’ll push him to his limit to grow him to his best, not so he can make friends, but so that He can be the best him he can be. You’ll realize that the Motherhood voices you heard calling you are new voices, not even on that silly old Motherhood path. They’re moms, standing in the forest, picking their own flowers with you. Smelling and sniffing and loving on their littles. They’re there to link arms with you and walk you through for a little while, and hold your hand, and tell you you’ll be okay and so will he.

And you will go from worrying about his future wife to praying for her, because you already know that SHE is amazing too, and she has been hand-picked as well.

You’ll put on your #TeamQuirky tee shirt just like every other mom puts on their #TeamMotherhoodPath because you LOVE your angel just the way they are, quirks and all.

You see, I wanted to fix him because I was afraid. I was afraid of leaving the Motherhood path. I was afraid for him and how he will make it when the other kids start poking fun and calling names at the kids not on their path.

But Mama? Here’s a secret.

There is no Motherhood path.

Only you, and your littles.

Every mother’s path is different.

And while it seems like you’re all headed down the same path, to the same place, the truth is, the only path that matters is the one you’re on. There is no finish line, no end zone, no home plate. Just you, guiding them on the path God has for them.

Just you, helping them be their best.

You’ll go from thinking you need to fix him, to looking at him with love and joy, exactly as he is. And this, my friend? This is exactly the way Jesus looks at him.

Don’t let satan scare you into thinking your child is broken. Don’t let him make you think of your child any differently than Jesus does.

You were hand-picked for this, mama, and your little ray of sunshine was gifted to you. What a privilege to realize the two of you were matched on purpose.

Together, the two of you will be amazing. Come back someday and tell me all about the mountains he’s climbed and the giants he’s slain.

Cheering for you (and you cheer for me too, ok?),