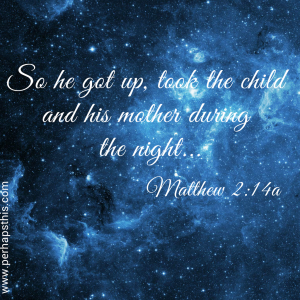 Are you joining me for our walk through the Bible this year? I’m so glad!
I did decide to go ahead and include the Old Testament as well. You can do as you feel led, but I know I felt a strong prompting to complete the entire Bible (and who doesn’t love a good walk through Exodus!) Here are today’s readings and commentary, where we are reading about someone else who followed God’s prompting…
Genesis 3:1-4:26
Matthew 2:13-3:6
Psalm 2:1-12
Proverbs 1:7-9
Matthew 2:13-3:6
Oh what it would have been like to be the earthly father of Jesus! Can you even imagine? We left off in our reading with the wise men bringing gifts to Jesus: gold, frankincense,  and myrrh. There is Joseph, providing for his wife and adopted son, when he opens the door to find Magi bearing gifts! Amazing gifts, not just bibs and diapers! (When was the last time you brought a camel’s load full of gold to a baby shower?)
(Can we sidestep for a minute and look at the gifts? Gold, for a holy king. Frankincense,  associated with priestly or holy worship,  and myrrh, used for embalming. These weren’t just gifts for ANY baby. These were gifts given to a holy king, a humble baby, who would one day die and take on the sins of the entire world.)
The Magi had left and Joseph heard from the angel of the Lord in a dream. (I imagine it is much easier to believe the angel at this point than it was in their first encounter, when the angel talked Joseph back down off the ledge of divorce.) He took Jesus and Mary in the middle of the night and left for Egypt where he stayed until Herod – the one who ordered the mass murder of all babies under 2 years old in an attempt to find Jesus – died. The angel appeared once more to Joseph, to direct Joseph to move once more, this time to Israel.
God spoke quite clearly to Joseph,  didn’t he? Do you think He speaks as clearly to us today?
LM will ask me time and time again, “Mama, how can I hear God?”
Oh sweet child. We can’t hear God if we’re spending all of our time talking.
We can’t ask for leadership in our life’s boat if we refuse to give up the wheel. {——> Click to tweet}
God speaks in many ways… through His Word, through dreams, encounters, intuitions, and even through audible language, as if He were sitting right next to you. But most certainly, we won’t hear God if we’re busy with our own agenda instead of His.
Joseph had to seek God daily to know how he was to raise God’s son. Of all these verses, do you know which ones resonate with me today? The ones where Joseph follows.
The Lord spoke. Joseph took Mary to be his wife.
The Lord spoke. Joseph left in the middle of the night. Not the next day. Or after he packed. Or after he posted a Facebook status. He left in the middle of the night.
The Lord spoke. Joseph got up again in the middle of the night and took the child and his mother to Israel.
He didn’t think about why or when or how or the details. He just followed.
What would our world look like today if we moved as quickly as Joseph did to follow direction from God?
Oh Lord, help us hear your voice this year,  louder than the voices of the naysayers, louder than our own busy schedules, louder than our personal desires. And more importantly Lord, let us hear, then follow.
XOXO,
Karen