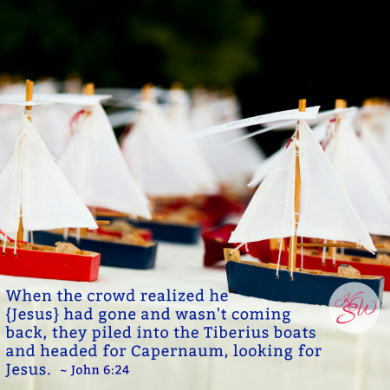 In John 6, Jesus had just finished feeding the 5,000. If you’re not familiar with the story, Jesus was being followed by a large crowd of people who had seen him do some miraculous things. I’m sure it was an odd mixture of intrique, fascination, and worship that brought all of these people to Jesus. I remember the first time I learned that 5,000 wasn’t really 5,000. It was 5,000 *men*… plus any wives and children that came along that day. Isn’t that even more incredible?

Anyway, JESUS, looks at this giant crowd of people and says to Philip,

“How are we going to feed everybody?”

“He asked this to test Philip, for he already had in mind what he was going to do.”

(Let’s pause for just a minute. How often do you think God does this to us? He already has a plan, he just needs us to stretch our faith a little.)

“Philip says to him, “It would take more than half a year’s wages to buy enough bread for each one to have a bite!”

Let’s stop and think about that. One little bite is all the crowd would get for a half a year’s wage, and Jesus doesn’t even have to snap His fingers to make it happen. He just makes it happen. Oh, how we limit our God.

So God performs this amazing miracle, by taking a little boy’s lunch, and multiplying it to not only FEED the 5,000 and their families, but to organize the meal, organize the distribution, and please a mass of people. I’ll tell ya, Thanksgiving? I’m good if I can manage a meal for ten, let alone 5,000. But that’s God.

We’re almost to the meat of the story. John 6:16-24 says Jesus’ disciples had left the hillside and set off by boat across the lake, and Jesus set off to the mountainside to be alone because these people were planning to force him to be king.

That is the complete opposite of what we do as humans, isn’t it? We want recognition. We want our name in lights. We want people to seek us out and put us on a throne. But not Jesus. He didn’t come to be king. He already was King. He came for one reason, to be our savior. Miracles and events that occurred in addition to that were not the reason he came. He did those things because he wanted to, not because he had to.

So his disciples set off without him and then Jesus, who wasn’t in the boat before, walked on water to meet them in the boat, and when he got IN THE boat, immediately the boat reached the shore.

How can that be? Well first, GOD. Some could argue and say that maybe Jesus was walking in shallow water and they were already near the shore. But no, the Bible clearly states that the wind was blowing, the waters were rough, and they’d only rowed 3 or 4 miles.

The Sea of Tiberius,  also known as the Sea of Galilee, is the largest freshwater lake in Israel. It’s 33 miles long and 13 miles wide.

It’s not that Jesus was walking along the shoreline and hopped in just before they got to the other side. Jesus met them in the midst of their troubled waters and delivered them to safety.

When the crowd discovered where he’d gone, verse 24 says,

They got in their boats and went to Capernaum in search of Jesus. When they found him on the other side of the lake, they asked him, “Rabbi, when did you get here?” Jesus answered, “I tell you, you are looking for me not because you saw the signs I performed, but because you ate and had your fill. Don’t work for food that spoils, but for the food that endures to everlasting life.”

And they said, “Great! We’re in!” No, they didn’t. They argued with Jesus. He told them he was the bread of life they needed. They asked for signs and wonders and proof that He was the son of God.

What sign will you perform, that we may see it and believe you?

And that’s what I want to challenge you with today. Why are you looking for Jesus? Did you follow Jesus across the lake on the boat looking for free food? For the things He can give you? Are you looking for him to be your Cosmic Santa? Do you truly believe that he’s God?

Or do you follow him, look for him, seek him out because He is, without a doubt, the Savior who walks with you each and every day, guides your steps, grows your faith, and loves you deeply?
Tell me your thoughts below.