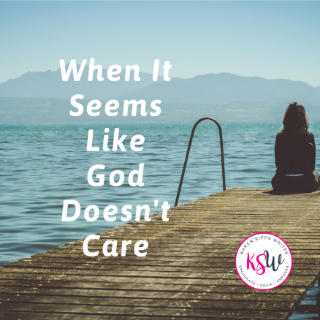 My Bible reading this morning hit too close to home. In Judges 6, we learn about how the Israelites abandoned God in favor of other gods. They were under oppression from the Midianites, who were so cruel that the Israelites were hiding in caves and rocks. Whenever they would plant crops, the Midianites would come destroy the crops and take all the livestock. Gideon was chosen by the Lord to rescue them, and the angel of the Lord visited him. Verse 12 tells us

“The angel of the Lord appeared to him and said, “Mighty hero, the Lord is with you!”

“Sir,” Gideon replied, “if the Lord is with us, why has all this happened to us? And where are all the miracles our ancestors told us about? Didn’t they say, ‘The Lord brought us up out of Egypt’?”

What he was asking was simple: “God, don’t you CARE?”

I know that feeling. I hate to admit it but I asked God that exact same question earlier this week. You see, we’ve moved a LOT. We moved to another state for work four years ago, and since then we’ve lived in four different houses as we looked for the right schools that could handle special academic needs for one child and the social butterfly needs of the other. God provided what we needed when we needed it, but it’s been hard on our family to constantly be searching for permanence.

This week we were supposed to close on a house. God had orchestrated everything but there were so many roadblocks. The paperwork was incorrect and had to be redone multiple times – change names, change figures, change taxes, this, that, and the other. Closing was scheduled on four different occasions. Finally, we were set to close (again!) on Tuesday but no kidding, I’m IN THE PARKING LOT waiting to close with the attorney and I get a call that it’s not happening.

I’d taken off work. My husband had taken off work. We’d checked the kids out of school. I had this elaborate surprise planned for the kids, to give them keys to their new house, and then I get that call. The numbers were wrong AGAIN, and oh by the way, we need more closing money.

I lost it. I drove the hour+ home, worried we would lose the house. Worried I’d lose my deposit because the closing was pushed out again. Worried (based on past experience) that the bank who was notorious for not having an ounce of urgency would push us out past the contract deadline. Angry over lost vacation time. Frazzled because I had to call the appliance delivery guy back again and reschedule the appliances.

As I’m pulling down our road, it spilled out. “God, don’t you CARE?” So many emotions were wrapped up in those four little words.
○ Don’t you care that we are basically nomads?
○ Don’t you WANT us to have a place to settle?
○ Don’t you KNOW how hard it’s been? (Of course He does. I’d probably prayer journaled 1,000 miles of paper over the past few years, not to mention the hundreds of hours I’d spent leaning on the shoulders of friends.)

But the whisper that came into my heart was so humbling. I heard, “Does one day difference affect the good thing? Is it not still a good thing? And look how you’ve responded. Look at your witness.”

And He was right. I may have actually texted a curse word to our realtor, and freaked out at the bank lady who had no kidding, ZERO sense of urgency over the entire ordeal. I didn’t say any curse words to her on my scathing voice mails but I’m pretty sure she’s not going to send me a Christmas card. (In my defense, who doesn’t call the client to tell them “Oh hey, by the way, we’re still not ready revising the paperwork we got FOUR DAYS AGO, so maybe you don’t need to make major plans to go to the closing attorney today?”)

But the point is, I didn’t have to do that. One day difference doesn’t mean the Lord didn’t still have a good thing under control. 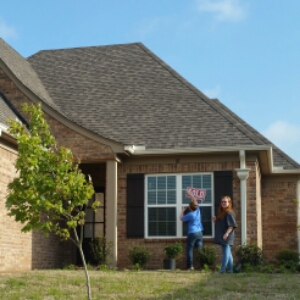 We did finally close, but it wasn’t the big surprise I’d planned. I actually signed all the paperwork, and the seller signed all their paperwork in a completely different office. It would be days later before I’d get keys, and because everything else was rescheduled, I had to drive an hour each way for the next week to meet with appliance deliveries and utility companies. It’s 10 days later and I still don’t have my copy of the paperwork. But I am learning to not sweat the small stuff. As long as God takes care of the big stuff, the small stuff will fall into line eventually. And the truth is, we have a beautiful home that we all LOVE that we’ll be moving into as soon as the kids get out of school.

I wish I hadn’t associated God’s love with easy times so hastily… and the presence of trials as a lack of caring. He’s proven over and over that HE does care, but I sure failed the test when it came to responding to the trial on the way to the blessing.

Let’s do better about that, want to?