It was decided. Laws had been made. The leader had made his mandate.

He gathered up the l 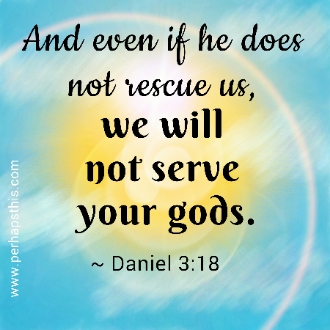 awmakers, judges, governors, and officials, and told them of this new law. Anyone who did not follow the law was to be killed. But there were those not following the law. Would they really be killed? And what would you do if a new law was made that you didn’t agree with? Daniel 3 tells us,

King Nebuchadnezzar made an image of gold, sixty cubits high and six cubits wide, and set it up on the plain of Dura in the province of Babylon. 2 He then summoned the satraps, prefects, governors, advisers, treasurers, judges, magistrates and all the other provincial officials to come to the dedication of the image he had set up…

4 Then the herald loudly proclaimed, “Nations and peoples of every language, this is what you are commanded to do: 5 As soon as you hear the sound of the horn, flute, zither, lyre, harp, pipe and all kinds of music, you must fall down and worship the image of gold that King Nebuchadnezzar has set up. 6 Whoever does not fall down and worship will immediately be thrown into a blazing furnace.”

King Nebechadnezzar had made the law in question. “When you hear the music, you must bow down to this golden god.” He had made the golden god, and not only required all of the leaders, governors, elected officials, and ANYONE who had any sort of leadership over the people to be aware of this law, but he required death for those who didn’t follow it. He wanted everyone to know that he meant business. This was a change in LAW, and by golly, this was HIS law, to be followed.

As soon as they heard the sound of the horn, flute, zither, lyre, harp and all kinds of music, all the nations and peoples of every language fell down and worshiped the image of gold that King Nebuchadnezzar had set up.

EXCEPT. Except these three: Shadrach, Meshach and Abednego. The king said, “Well, three won’t bother me. Everyone else is following this new law I made. What harm will these three do to let them ignore my new law?” Not really. The king demanded their appearance before them. He was angry at their defiance.

14-15 “Is it true, Shadrach, Meshach and Abednego, that you do not serve my gods or worship the imageof gold I have set up? Now when you hear the sound of the horn, flute, zither, lyre, harp, pipe and all kinds of music, if you are ready to fall down and worship the image I made, very good. But if you do not worship it, you will be thrown immediately into a blazing furnace. Then what god will be able to rescue you from my hand?”

Oh my friends, here’s where the rubber meets the road. Where it gets serious. These three men of God were standing directly in front of the king. He demanded they follow this law, or die. Listen to what they said:

16-18 “King Nebuchadnezzar, we do not need to defend ourselves before you in this matter. If we are thrown into the blazing furnace, the God we serve is able to deliver us from it, and he will deliver us from Your Majesty’s hand. But even if he does not, we want you to know, Your Majesty, that we will not serve your gods or worship the image of gold you have set up.”

And if not? If He does not recuse us? We will still serve Him.

Furious at their lack of respect for his law, the king was ready to set a precedence.

The heat? Oh it was hot alright. It wasn’t just a fire pit with air circulating around it. Not at all.

22-23 The king’s command was so urgent and the furnace so hot that the flames of the fire killed the soldiers who took up Shadrach, Meshach and Abednego, and these three men, firmly tied, fell into the blazing furnace.

He threw them in the fire, bound, and tied and walked away, expecting them to die. Expecting to make an example of them. These men served their God until their dying hour, unwavering in their faith. But it was God, not Nebuchadnezzar who would have the last word. The king saw four men in the furnace. Walking around, not bound and tied. He said, “Look! I see four men walking around in the fire, unbound and unharmed, and the fourth looks like a son of the gods.”

26-27 Nebuchadnezzar then approached the opening of the blazing furnace and shouted, “Shadrach, Meshach and Abednego, servants of the Most High God, come out! Come here!”

So Shadrach, Meshach and Abednego came out of the fire, and the satraps, prefects, governors and royal advisers crowded around them. They saw that the fire had not harmed their bodies, nor was a hair of their heads singed; their robes were not scorched, and there was no smell of fire on them.

Then? The faith of three transformed a nation, by standing firm to their faith. Hundreds of thousands, if not millions of other “Christians” followed the letter of the law. Only three stood firm.

28-29 Then Nebuchadnezzar said, “Praise be to the God of Shadrach, Meshach and Abednego, who has sent his angel and rescued his servants! They trusted in him and defied the king’s command and were willing to give up their lives rather than serve or worship any god except their own God. 29 Therefore I decree that the people of any nation or language who say anything against the God of Shadrach, Meshach and Abednego be cut into pieces and their houses be turned into piles of rubble, for no other god can save in this way.”

Standing up for your beliefs is not new. In Shadrach, Meshach and Abednego’s case, God allowed this trial and testimony of their faith to lead a nation back to Him. Even when things look dark and gloomy, the goings-on in the world are no surprise to God. As long as man has been alive, satan has been there to tempt him with pride, fear, and divisiveness.

Shadrach, Meshach and Abednego are still living today, only their names are different. They are standing up for their faith in Israel, in Africa, and here in America. They are imprisoned, beaten, bullied, and beheaded. Because there will always be man-made laws that are the opposite of God’s laws. There will always be leaders who aren’t following God, who make laws that aren’t aligned with God’s will. But it’s going to be up to you to decide if there will always be those who stand strong in their faith, who follow God’s laws no matter what. Like Shadrach, Meshach and Abednego, it’s up to you to seek Godly friends who will stand in the fiery furnace with you. Just as it was in their day, today there are millions of Christians who, if given an ultimatum, would not step forth and say, “No matter what, this is our God. This is our belief. This is our stance. And we will not follow your law, period.” It can’t be someone else, it has to be you. And it has to be me. We have to be the ones to stand up for our faith because if we don’t? Who will? Who will stand up for God’s truth? It has to be us. Because if we let someone else take up what should be our cross, eventually there will be no “someone else”.

Above all, we must remember that if God does not rescue us from whatever furnace we’re facing, He is still good. He is still God. He is still worth serving. And neither this, nor any other law can define, surprise, or limit your God.